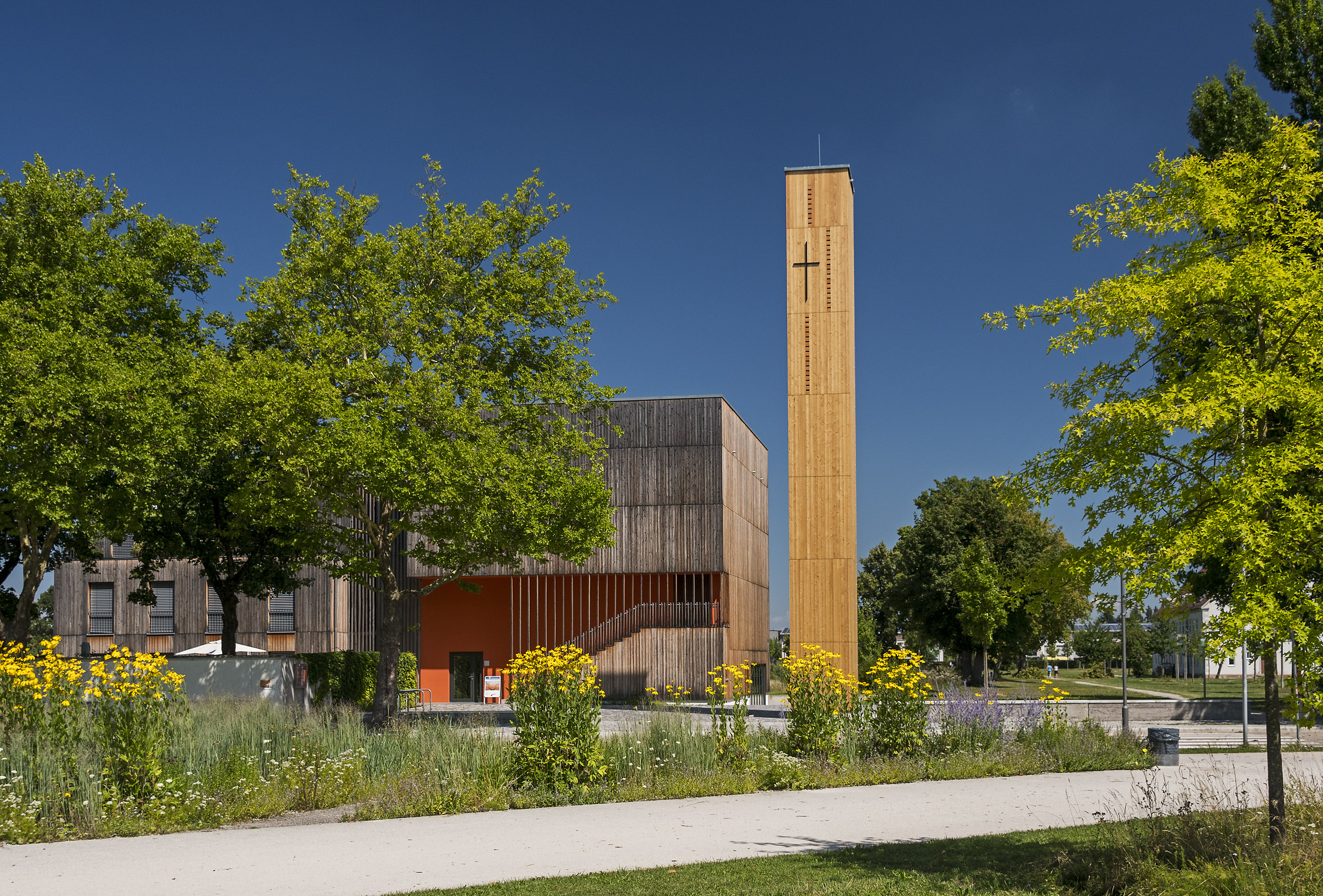 The area called Sheridan Park is a new 70 hectare district that was created on the site of a former barracks. Residential, commercial and open spaces find each other in a new urban planning order. The old stock of trees, wide green parking areas, some buildings like the former officers’ mess and the Grasiger Weg as an east-west connection are building blocks of an earlier time. The new building of the Old Catholic Church Augsburg with sacred space, community hall, parish office and three apartments is deliberately placed in the middle of the Sheridan Park, at the intersection of the Grasiger Weg, the park and the residential areas. The wall facing Grasiger Weg forms the spatial support of the church square, which opens to the wide park to the south. Church, parish and residential areas are arranged in two compact structures to each other. On the ground floor of the main building is the community hall, on the upper floor above it the sacred space – so the congregation stands with feet on the ground and looks with the heart skyward.
The church room is a bright wooden room with a floor area of 13 by 16 meters. Four walls span the simple, nine-metre high church room, the black, polished screed and the horizontal pine moulding of the walls create a calm atmosphere. The roof construction, similar to a shed roof, with four glazed trusses and convexly curved, white-glazed roof surfaces directs daylight from above in a modulating manner into the church room, which can accommodate up to 80 people. As a meeting room, the main room forms a centre without excessive hierarchies. Neither windows nor wall decorations disturb the concentration.
The buildings were constructed in low energy standard in modern wood panel construction. The building envelope and roof are highly thermally insulated. Visible board stacked ceilings in the residential building and a concrete ceiling between Parish hall and church room increase the storage mass of the building. The construction method combines stability of value, Ecology and materiality. Clothing made of vertical planed board formwork in larch soon becomes a fine one, silver-grey natural patina. The main building material is wood, over 260 cubic meters were installed. This represents an active contribution to climate protection because this building will hold a CO2 volume for a long time of approximately 260 tons is stored.
The Campanile of the Apostle Junia Church in Augsburg – the Campanile (derived from campana ital. for bell) is a freestanding bell tower, which from an urban planning point of view represents the
Position of the Apostle Junia Church at the intersection of Sheridan Park and Grasiger Weg marked as a built sign visible from afar and the significance of the place amplified. The slender structure occupies the southeast corner of the church square and creates a spatially exciting Effect opposite the one who steps back behind the wall residential building, the church with its covered
entrance and the expanse of the surrounding landscape park. The 18 m high tower towers above the church building by a good 20 feet. The ground plan of the Campanile follows the dimension of the Bells and their swing lengths. The four-part Ringing is over almost seven meters in the upper part of the Tower in a row. The smallest bell with 57 centimetres diameter hangs at the top of the tower followed by the other three bells. The largest of the four bells measures 88 centimetres in diameter and weighs 420 kilograms. With a little distance to the walls, the bell needs Approximately 2.50 meters of movement space.
The pitch of the ringing was adjusted to the location and the existing churches. The sound openings were chosen with care, taking into account the audibility on the church square and in the nearby residential buildings. The slits at the height of the bells measure 3 by 15 centimetres and face south and north into the park. Similar to the sound holes of a violin, these narrow openings are completely sufficient for the optimal sound propagation. Both the tower and the church are built entirely of wood. The 16-centimeter thick walls are made of cross laminated timber. These are solid wood panels, as wide and as long as the tower, made of spruce boards glued crosswise. The boards were delivered by the manufacturer to the workshop of the timber construction company Gumpp & Maier in Binswangen. There the actual construction work took place. The four panels were screwed together with the roof cover and some platforms while lying down. The bells came together with the yokes made of oak wood from the Bachert company. In Binswangen they were hung into the tower before the fourth wall was closed. The assembly of the bells, the drive technology and the cabling in the lying down position made the work much easier, as bells are normally installed in the tower on site. Finally, even the cladding of planed boards was applied to the outside. So the tower was ready to travel.
With its 18 metres in length and 3 metres in height, the structure was transported from Binswangen to Augsburg while lying down and then hoisted onto the prepared foundations on site. First the wooden construction was lifted horizontally from the truck with two cranes and then turned in the air. This ballet number was very sensitively controlled by the crane operators, who placed the 20 tons of weight on the foundation plate on only one hook and threaded it into prepared 24 millimetre thick threaded rods. These were used for non-positive attachment in order to safely transfer the loads from the chimes and the structure into the ground. The transport was announced in the early morning hours on the traffic radio and by midday the tower was already firmly anchored at its destination. The Campanile is now visible from afar and the sounding became the landmark of the Apostle Junia Church, he makes them outwardly recognizable to what it is, a church in the middle of the park. 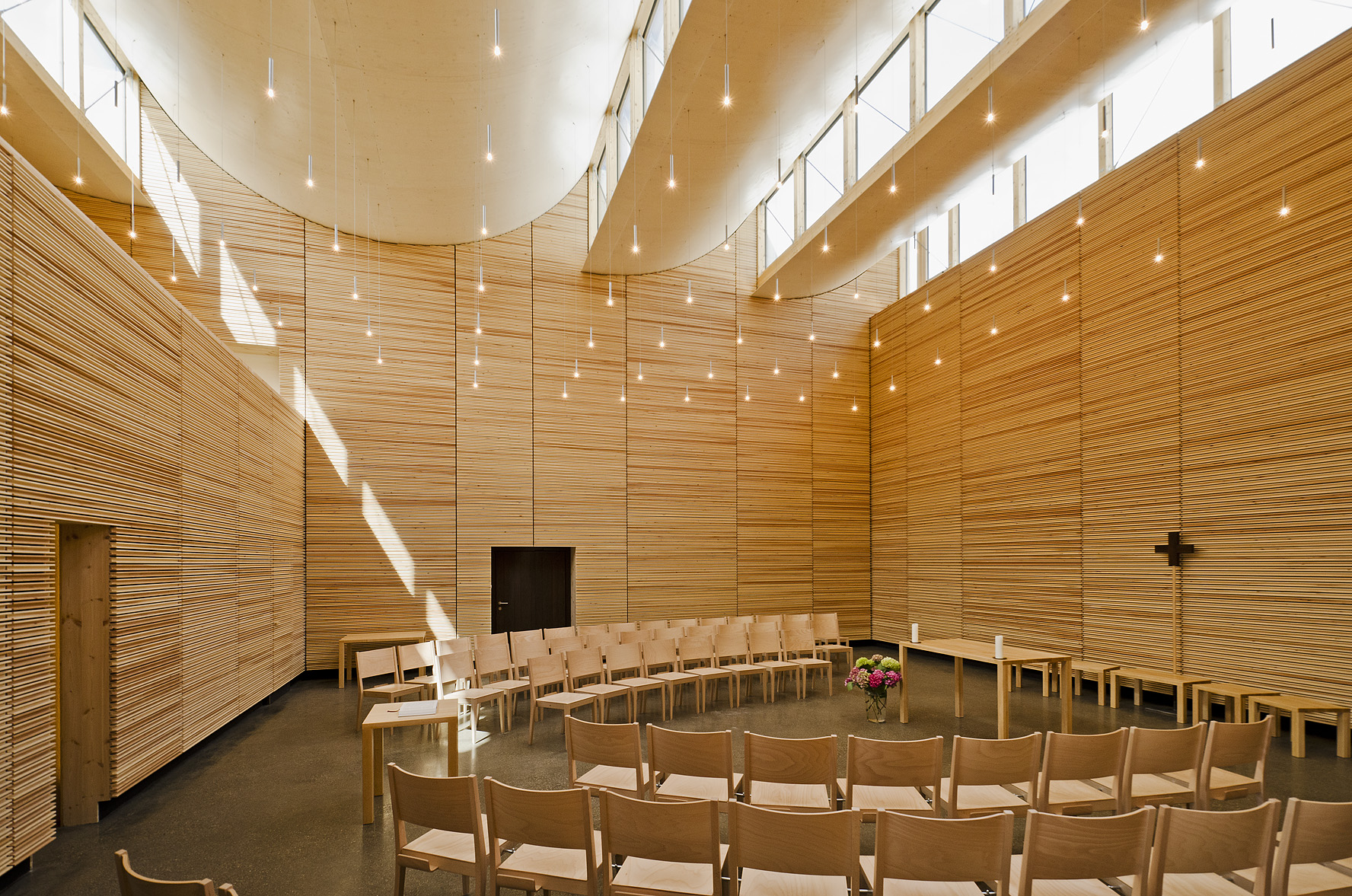