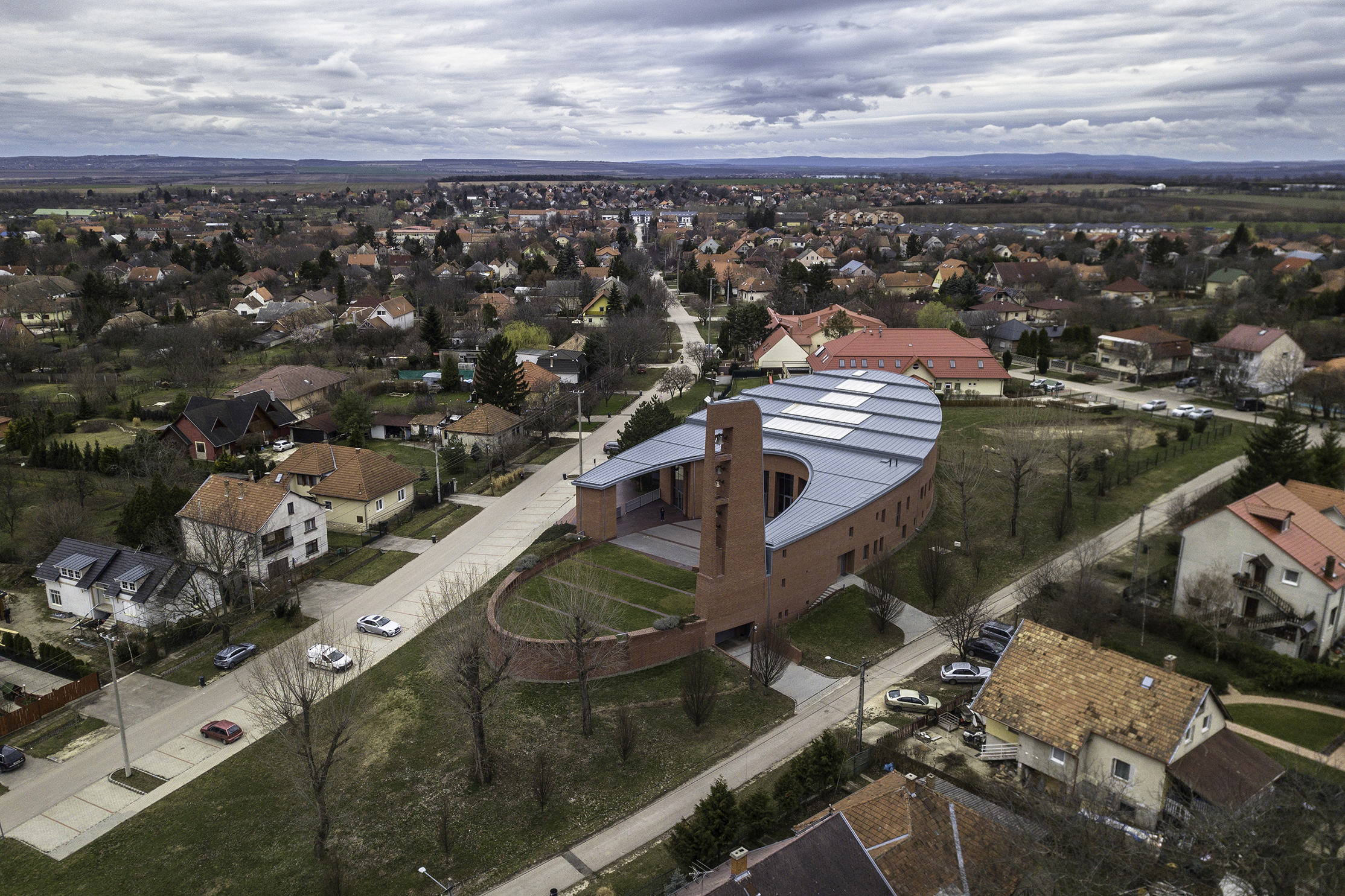 Church of Pope John Paul II, Páty
Our office was awarded the tender to design the church in Páty, in a restricted design contest in 2004. The entire design and construction process was carried out with the organisation and involvement of the local community. The building was erected mainly with the help of donations and was consecrated in 2019.
The Church of Pope John Paul II represents a conscious response to liturgical changes in recent decades, rendering it a model church experiment in contemporary church architecture. Emphasis is shifted toward the active involvement of worshippers. The community is not a passive observer of events in a sanctuary, but rather actively experiences the holy act.
The Church clearly defines its purpose: while the Creator and the almighty God are at the centre of traditional liturgy, modern liturgical efforts have shifted emphasis to the recreator God, the image of a perpetually redeeming Christ. As Saint Augustine said, “the Church is created through the Eucharist”, and so is the belief in Christ, the celebration of the Eucharist today at the centre of communal experience.
This is the source of central spatial design. In our design the nave functions as the church yard, while the liturgical space resembles the sanctuary of the Baroque church ending with the apse. The traditions of historical church architecture are expressed in a novel form: the broken angle of the yard and church interior, i.e. of the axes of the nave and the sanctuary, is a Medieval symbol, a metaphor of the broken body.
Within the church interior, the emphasis of sacral functions is provided by surfaces illuminated by spot and diffused light within the reinforced concrete cupola. The proximity of the altar, natural light directed at the centre, and an intimate atmosphere, inspire an appropriate ambiance and reflection.
The green stone block at the altar is the focal point of the space. When sanctifying the church, the relic of the blood of Pope John Paul II was placed at the bottom of the altar stone. The recess of the reliquary is closed with white carved Carrara marble, bearing the coat of arms of the Pope. The floor plan of the altar adjacent to the floor is rectangular, adapted to the panel layout of the floor, connecting to the earthly world. The contour of the stone changes and widens upward, and its corners are rounded off to allow gathering around the altar.
The liturgical space is surrounded by communal and educational rooms, an event hall, guest room, the priest’s living quarters, offices and service rooms, forming a unified whole together with the yard. The elliptical layout of the church in the small-town, heterogeneous environment symbolises perpetuity.